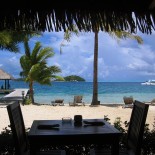 It was about 3:30 in the afternoon on Feb 16 when Sue dropped the bomb. We were seated in the first row of business class on a Boeing 777, about 1 hour into the 4 hour flight on Singapore Airlines (SQ) from Taipei to Singapore. The flight had leveled off at 39,000 feet, we were just south of Taiwan, and it was a brilliantly clear and almost cloudless day over the deep blue waters of the South China Sea.

I was sipping a cognac, and Sue was drinking water. She had the window seat, and I had the aisle next to her. There were a few open seats near us, and it was shaping up to be a smooth and easy flight. Both of us were partially reclined, relaxing with our Bose headsets on, and until that moment my deepest thought had been whether to order scallops or crab for my meal. That situation was rapidly changed.

Out of the corner of my eye, I saw Sue bring her seat fully upright, and take off her headphones. Then she reached over and tapped me on the shoulder. I dropped my headset, sat up, and caught the bomb.

Up until then it had been a good trip. We had left Boston on Saturday AM, got to Taiwan on Sunday night, and had spent the week working with our colleagues in Hsinchu, and spending a few days at some subcontractor sites in Tainan, Hsinchu, and Chungli. Now we were on our way to the office in Singapore. It would be Sue’s first time in Singapore so I was looking forward to playing the tour guide and introducing Sue to my favorite city on the planet. Basically it had been an uneventful trip, the usual long dinners and longer days, but nothing really unusual. Her 3-word sentence had changed all that.

“I found out on Friday, just before we left.”

OK, I’ll admit it. My face would not have won any awards at a poker table. After the first second (or two or three) of shock, I broke into a big grin and said something really profound like “wow”. We are talking about a life changing event here. Leave it to a male to say something as profound as “wow”.

But let’s face it; this is one of life’s “wow” moments. There is also a generational and gender gap in dealing with this type of news. I’m old enough to be anticipating being able to retire, and Sue is a 30 year old blue-eyed blond with enough brain power to take care of any engineering challenge I have ever tossed her way. Sort of my girl-Friday, but on the technical side. If you are a fan of Stargate-SG1, and know who Amanda Tapping is, you will have a good idea of what Sue can do, and what she looks like.

And now she’s pregnant, and she’s telling me this while I’m sitting next to her, and I’m trapped in an airplane with nowhere to hide.

“I wanted you to know why I’ve been acting sort of odd this week, and not eating any shellfish, or having anything to drink.” As if she needed to explain that!

“Sue, I had no idea. I just thought it was a bit of jetlag, or maybe your stomach wasn’t feeling so good, so you were skipping the shellfish. I didn’t even give it a second thought. You’re pregnant? That is so cool.” At this point my mind is racing, with about a hundred different scenarios and what-to-do options flashing in my brain.

Sue went on to explain that the first home pregnancy test had been positive on Thursday, and she came in late on Friday because she had gone to the doctor for a confirming blood test. The office had called back Friday afternoon, just before we left the office. The doctor said that traveling, even to Asia, wouldn’t be a risk, but she should avoid alcohol (of course), and also shellfish. Especially shellfish in Asia.

And now I have to figure out what I’m going to do over the next six months to adapt to Sue’s pregnancy, and to restructure the team at work after that while she’s out on maternity leave.

I guess it will all work out alright, these things usually do. I mean that there are at least three 3 billion examples of successful pregnancies now walking the planet, so the odds have to be with her. Of course it is going to be nerve wracking since this is her first child. So I opened up the Singapore airlines in-flight shopping magazine, and found a cute stuffed mouse doll. It snores when you squeeze it’s foot, and it’s belly rises up and down with the snoring (sort of like a pregnant woman!). Presented it to her at 39,000 feet, with a red ribbon courtesy of the flight attendants, and saw a trace of tears on her face.

So let’s all get together and wish Sue and her husband Steve all the best.

(Oh, and in case you are wondering, it was a boy)

This entry was posted on October 26, 2013 by jlroehr in Passenger thoughts and tagged Flying pregnant, Hsinchu, Singapore, Singapore Airlines, Taiwan.

Tammy & Chris on the move

Exploring the world one step at a time